In response to requests from visitors to our site, we would like to present the following video of a speech made by Commissioner Jeff Rader to the community on September 6, 2014:

RE: No High-Density Construction

The Board of Commissioners on November 18 accepted the request of the Developer (Arrowhead) to withdraw their application to rezone the Briarlake Forest for high-density construction.

Following that event, the Briarlake Community Forest Alliance Board met to reflect on what we were able to achieve since Labor Day as a basis for our next steps.

Here are the ten things that we contributed to:

1. The withdrawal of the cluster home rezoning application.

2. The prevention of the use of public funds to enable high-density construction.

3. The finding that there was not a legally binding commitment given by DeKalb County for greenspace, a park or reserve.  Therefore, the County did not renege on their legal commitments – there never were any.

4. The organization of the 12 surrounding neighborhoods, giving us one voice.

5. The research and documentation of the problems that ANY development will impose.

6. The establishment of connections with DeKalb County.

7. The understanding we now have of the developer’s unexpected change of position – first asking for Deferral and later asking for a Withdrawal of their rezoning application – is that this change was not solely a result of our efforts.

8. The contracting with one of the best qualified zoning and permitting lawyers in DeKalb County,

9. The identification of alternatives to development and potential funding.

10. The solid proof that we are stronger together.

We call on everyone to stay informed and to contact the County Commissioners to encourage them to work with the community to preserve all 21 acres.

TPA-Arrowhead Real Estate Partners withdrew its application to rezone the Cathey property yesterday evening at the Board of Commissioners hearing. Attorney David Flint made this surprise announcement in the following speech:

Briarlake Community Forest Alliance President Richard Marion responded by expressing BCFA’s support of the request to withdraw. He asked concerned citizens in the audience to stand to show their support of BCFA’s efforts:

After hearing Planning Staff express their support of the withdrawal, District 2 Commissioner Jeff Rader made a motion to accept the withdrawal, but shared some comments prior to the motion:

The County Commission voted unanimously to accept the withdrawal.

A detailed analysis of the results of this process is now available (see Recap of Achievements of BCFA To Date). There is much information and experience to process, and the BCFA Board is working to provide the best possible information to help our readers understand what has been achieved.

The memorandum below was delivered by hand to all current County Commissioners this morning: 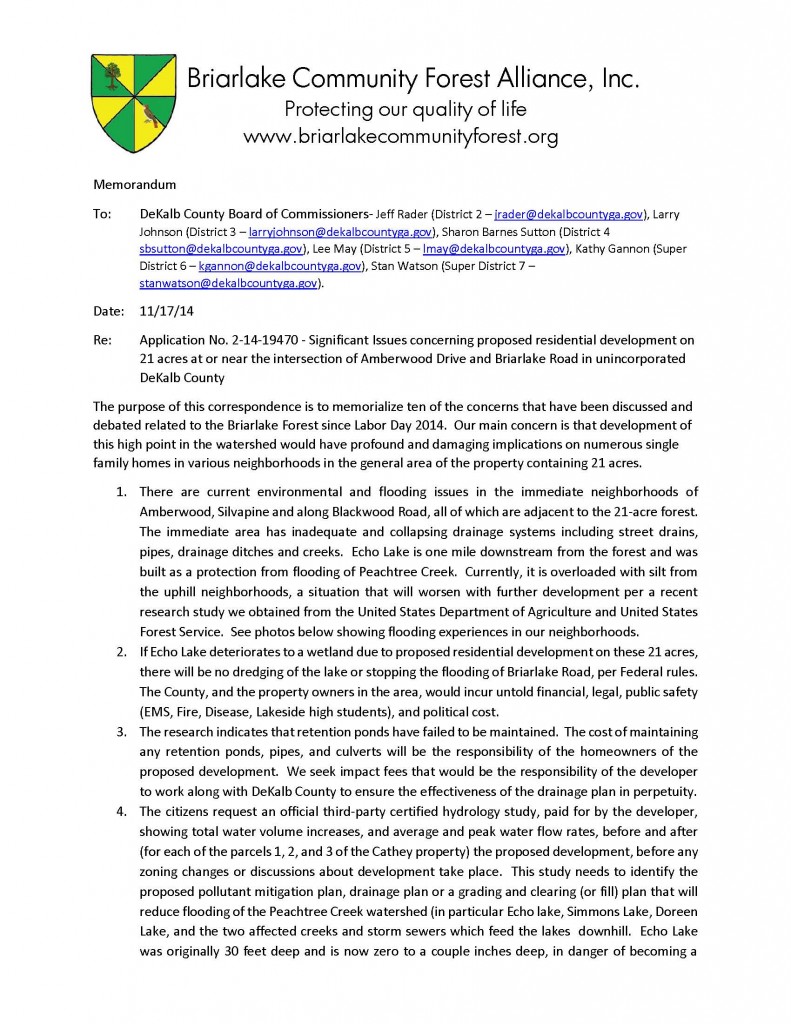 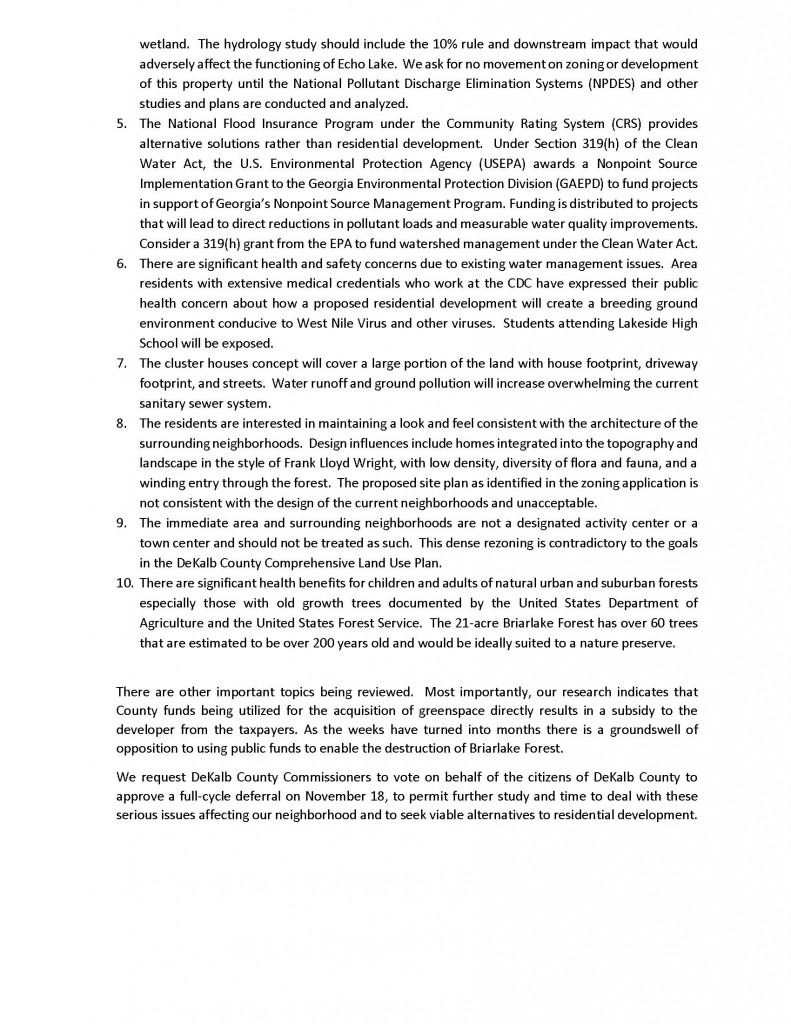 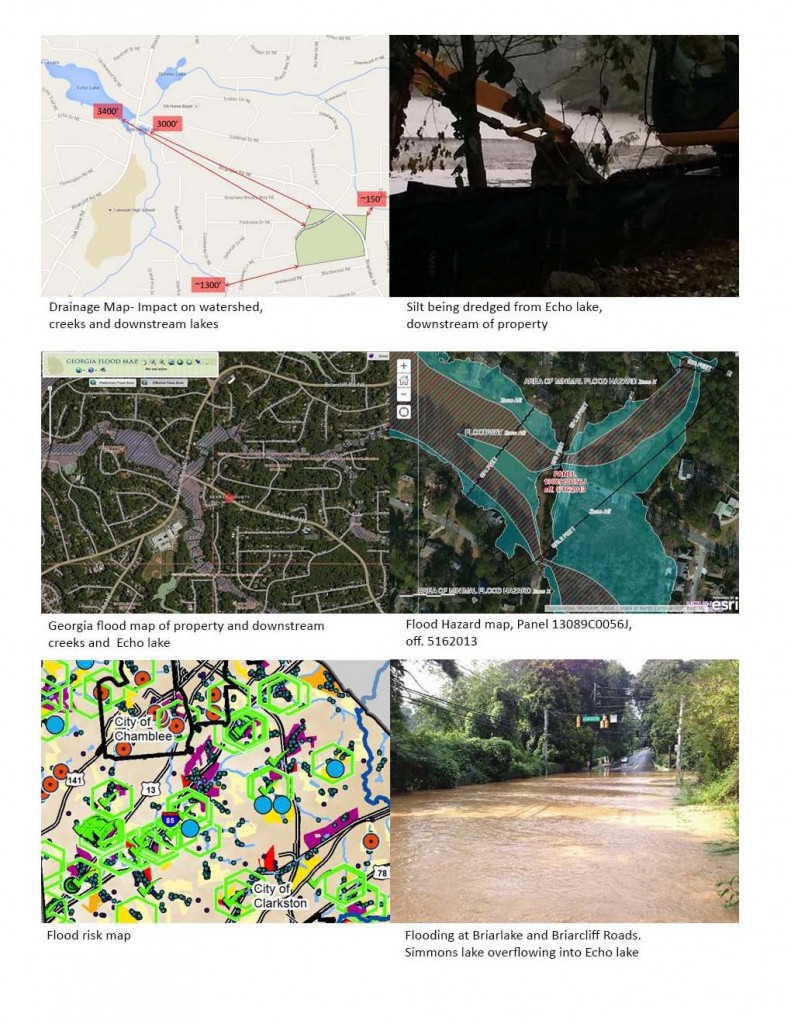 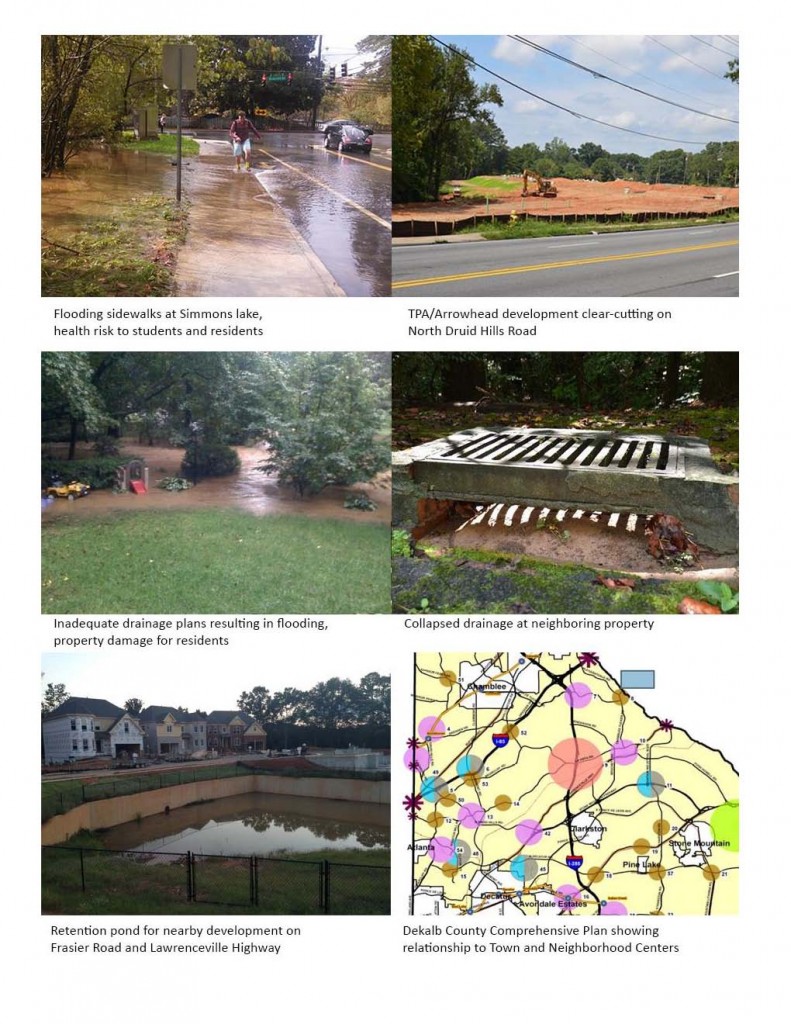 The November 6 hearing of the Planning Commission was well attended by supporters of the Briarlake Community Forest Alliance. Most supporters wore green to show solidarity with our efforts to ensure a transparent process and oppose rezoning the property to R-NCD. Name badges with the BCFA seal were handed out and worn by many people in the audience.

The developer, TPA-Arrowhead Real Estate Partners, was represented by attorney Mark Forsling of the firm Schreeder, Wheeler and Flint. Forsling made the following presentation to the Planning Commission:

During the ten-minute period allowed for public comment, BCFA President Richard Marion spoke in opposition to the proposed rezoning. His speech outlined the community’s concerns including the major concern that the proposal has been presented to the community as including an agreement with the County to purchase some of the land for public greenspace. This would effectively amount to subsidizing the developer’s profits. Mr. Marion asked the Planning Commission to recommend a full cycle deferral so that the community could more fully understand the proposal and the environmental consequences of development. He also presented a written analysis of the proposal with regard to the DeKalb County Comprehensive Plan to the Planning Commission members.

Following Mr. Marion’s speech, Echo Lake HOA Treasurer Ben Seibel spoke about the concerns of the Echo Lake community. Referring to the iTree Hydro study that estimated a significant increase in runoff resulting from development, Mr. Seibel voiced the concern that development would cause heavy flooding at the intersection of Briarlake and Briarcliff Roads, presenting a life-threatening situation to pedestrians including Lakeside High School students. Further, the amount of silt that would be generated would make Echo Lake residents’ efforts to maintain the lake unsustainable.

The time allotted for public comment ended with Mr. Seibel’s speech. Several more people had stood up to speak; the moderator told them they would have another opportunity at the Board of Commissioners hearing on November 18.

After the public comments had ended, Planning Commissioner Jon West posed a number of questions to the developer’s attorney. A transcript of this discussion may be downloaded. First, Mr. Forsling said that TPA-Arrowhead is not interested in pursuing the R-NCD zoning if the county opts not to acquire the greenspace for park land. Of special interest are two comments made by Bryan Flint, vice president of Arrowhead Real Estate Partners. Mr. Flint said that “the property was looked at for park space before and had been purchased before” and that “we do this reducing value by reducing lot sizing so we’re trying to still create a development that is economically feasible.” According to what Mr. Flint said, the reduced lot size means a reduction in value of the property, presumably from the value it would have under the current R-100 zoning.

Planning Commissioner West concluded the discussion with the comment that “this is going to need a lot more detail to show that . . . this is a benefit.” A motion was made to recommend a full cycle deferral, the motion was seconded, and the Planning Commission voted unanimously to recommend full cycle deferral of the rezoning proposal. The vote was greeted by enthusiastic applause from the citizens in the audience.

BCFA volunteers handed out a sample letter to encourage citizens to write or call their County Commissioner.